Not everyone can party until midnight, especially in our family.  This year the remaining party guests were Grace and Corrine and us.  David almost made it, but sleep grabbed him at 11pm when he laid down on our bed  to play his Nintendo DS.  However, in a surprise move, I -the mom- made it to midnight without a nap...well, until New Year's afternoon. 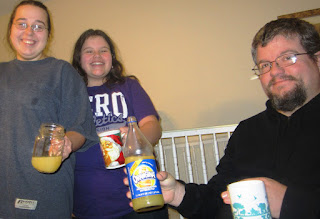 We watched Netfix movies until midnight only to find out that one was deleted from Netfix streaming at midnight while we were mid-movie.  So unless I want to go rent it, I'll just assume that Anna & the King, ends like the King & I.

At midnight we used coffee mugs and a mason jar to toast in the new year with Orangina.  This past year, the kids broke all my fluted cups/goblets, but when toasting with Orangina, I'm not sure there is a very formal standard.   Oh, but the girls were impressed that daddy was sharing his French soda.

Flee the evil desires of youth, and pursue righteousness, faith, love and peace, along with those who call on the Lord out of a pure heart.--IITimothy 2:22
Posted by Leatta Workman at 7:09 AM