What a busy week! Grandma had not been to visit for about two months so she came Sunday night to help out this week.

Monday:
The morning started early with surveying a 2 mile nature trail for work. Followed by therapies for Jon at the Rehab building, making final preps for school to start tomorrow & then going to teach college class in Branson (for me) and in Parsons, KS (for Ed). AND THE DISHWASHER STOPPED WORKING.....UGH!

Tuesday:
I got home from Branson at 12:30am last night & Ed left with Jon at 2am! Nate is still having problems with fever and higher than normal heart rate so between getting him meds, resetting alarms and getting Ed out the door....well, morning came VERY early. Plus it was the dash to get kids to their first day of school! We did it & on time! I got Hannah off to 4th grade and David & Vanessa off to 1st grade.

Matt started preschool (2 mornings a week) this morning. While he is there, they will do his therapies so it will save me from running so much. I will take Matt, but he will ride a bus home. He was ready to play with the kids and separated from me much easier than I thought he would...mixed blessing since I want him to be well-bonded, but also confident in new situations. The teacher gave him a small backpack and he is in love with it all....the teacher, the kids, the bus (which he calls "the buts") and the BACKPACK! 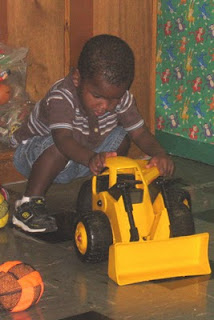 In the afternoon our new housekeeper had her first "solo". Of course with mom here, I'm not sure it was very "solo"... but she survived mom's "how to clean" instructions and said she would see us tomorrow when she left...so we know she is long suffering. :)

Everyone got home with good reports on their first day. Jon's surgery was a bit more involved than expected due to some damage from his first feeding tube, but he is resting well tonight in the PICU.

Wednesday:
Oh, morning was scheduled too early for me today! I was up from 1:30 to 4:30am with Nate having problems, fussing and needing care. Luke joined us from 2 to 2:30 am for some unknown reason. Thankfully Grace was a major help getting kids around and out the door. I took Matt to preschool & he was ready to GO! He had his backpack and shoes on at 6:05am and was standing at the door. Grandma had to help convince him to get dressed in something besides pajamas!

The new housekeeper came back this morning! I came home from getting Matt to school, made some calls, loaded up the crock pot to make Curried Chickpeas for supper, got the babies down for a nap and crashed in bed!

Jon is more uncomfortable today and is having some nausea so they are not going to start feeding him until tomorrow.

Thursday:
Another rough night with Nate, but better than the night before. After I got the kids off to school, Matt realized that he did not get to go to school today too so I enjoyed the first of many BIG fits. Nate and I headed to his check up this morning. He weighed 19 pounds 7 ounces so his meds will probably need adjusted by the cardiologist. Nate has an ear infection from teething as we thought and the doctor counted 5 teeth trying to break through.

The dishwasher repair guy got the new door latch in and fixed the dishwasher....yes! $94....ugh! I got another afternoon nap while the babies napped...yes! Then while we slept, the guy who has volunteered to help with our lawn this summer came and his crew did another awesome job! I think our yard looks better each visit! Such a blessing!

This afternoon I made some calls...one to get Matt in preschool 4 days a week. Then we had a big supper tonight of turkey roast, mashed potatoes, stuffing, noodles, green beans with new potatoes, french bread and carrot cake....I've been avoiding using the oven due to the heat, but it was time for a REAL supper!

Ed reports that he is not cut out for hospital living and that the hospital started feeding Jon through the new tube. He said they are starting very slow, but Jon is tolerating it and seems more comfortable today.

Friday:
More fits from Matt as the kids went to school and he didn't. I went to Hannah's IEP meeting with Matt at 8am. Not a busy day so I worked on organizing my desk , getting ready for class Monday night & getting ready for Grace & Corrine's homeschooling that starts Monday. Corrine started some schoolwork today because she is so anxious for 4th grade.

Ed called at 1pm and said that Jon did so well overnight and with his morning feed that he gets to come home this evening instead of in the morning. I then got to hustle to get Jon's feeding pump and supplies delivered early. The supplier delivered an old basic pump without the programming features that I need for Jon, and it requires the bag to hang well over my reach. However, it and a timer will work for the weekend. This looks like a supplier doing some profit taking, but hopefully looks are deceiving and we can get a real pump like Nate's on Monday.

Ed got home with Jon who was ready for me to hold him and kiss on him. Jon was full of smiles! So good to see him happy after such a rough week!

Next week: Ed starts school at the high school. Corrine starts violin lessons, and I take Vanessa to St. Louis Children's.
Posted by Leatta Workman at 5:59 AM

Email ThisBlogThis!Share to TwitterShare to FacebookShare to Pinterest
Labels: kids