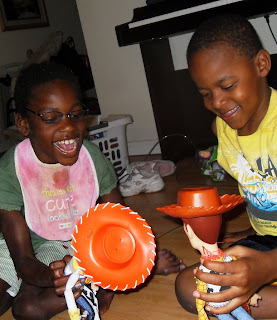 Vanessa turned 8 while we were on vacation so we celebrated tonight. We had pizzas for supper with toasted ravioli and mango punch. Instead of making the crust & sauce, I bought a pre-made crusts and sauce kits to save on time. I thought it was terrible tasting and apparently the kids thought so too because there was leftovers. Vanessa opened her gifts and got two necklaces, Cowgirl Jessie, Barbie (from Toy Story) and clothes. David immediately had Buzz and Woody out from his toys and we were knee-deep in pretend play. Everyone was complaining when I interrupted them for cake, but David quickly added, "and ice cream!" With his exclamation, the stampede to the table began. As soon as the table was cleared, we all headed outdoors for fireworks.

Our neighbor has a fireworks obsession and once a year his wife lets him put his obsession into action in the form of a neighborhood fireworks show. He blocks off the street and for about 30 minutes, and he treats us (and any of our friends who stop by) to a fireworks show that rivals most municipality's celebration. Tonight was the night chosen for this year's show and it was amazing. I think each year the explosions of color get bigger and higher in the sky! I loved it!
With a couple exceptions, our kids loved it too. Matt was amazed by it and wanted more. The twins were in awe. Jon cried from start to finish, but cried harder when Grace offered to take him inside....it was like he loved to be scared by it! Nate loved it until one of the fireworks made a whistle sound and then he was done with it. Ed took him inside where it was quieter (and air conditioned) and they watched through the window.
Posted by Leatta Workman at 12:33 AM