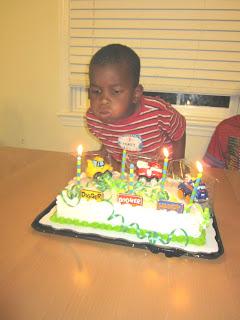 My petite bundle of song and dance energy turned 5 today!

Due to the severity of malnutrition in his first years in Haiti, Matt is still so small and is so far behind his peers.  Malnutrition in infancy has such a cruel fate on its small helpless victims.  It can cause trust issues and food issues and learning/self-control issues from the underdevelopment of the brain during those critical months.  Matt has been home almost as long as he lived in Haiti.  He has grown.  He has developed tons of new skills, but he continues to lag behind his peers.  Fortunately, Matt is unaware and mostly unaffected by his small size and his struggles to master language and early academics.   Although he gets frustrated with his tendency to stutter. 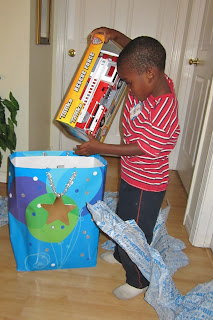 Next week I meet with the school about the transition to kindergarten.  He is just not ready and I'm really not ready for him. I know that if there is a time that he will discover his challenges, it will be with the help of his Kindergarten classmates.  I would rather he remain oblivious to how he compares to his peers.

However, tonight there was no worries.  As Matt says there was "just fun,fun, fun!"  Matt fell asleep on the couch after school and we had to woke him up at 7:20pm to get him to finish celebrating with cake and ice cream!  Not to mention presents!

BTW-A birthday money $aving tip:  Matt's cake below was a plain ready made bakery cake with green edging and a ribbon.  I purchased the $2.89 toys on top and kept them in their plastic packaging to keep them clean.  The names of the trucks were cut off the cardboard box and added along with the candles.  The result was a cake plus 3 toys (rather than a cake topper figurine) for under $20.  I would have paid $24+ for a character cake from the bakery and the cake topper would have been a waste. 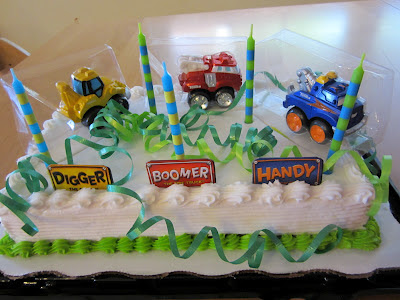 Posted by Leatta Workman at 5:28 AM