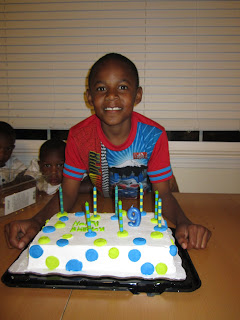 This is the 4th birthday that David has celebrated since he became a part of our family.  It is amazing to me to see how much and how fast he has grown.  I really miss 5 year old David who would sneak in our room and slept by our bed; AND 6 year old David who was frightened by his big new school; AND 7 year old David who worried I would die like his birth mom; AND 8 year old David who told me that I love him "too much", but I'm glad 9 year old David is able to start this year confident of himself, his place in the world and as fearless as his peers.  We have been through many milestones in 4 years and I look forward to many more while wishing we had lived his first 5 years together too.

﻿ Birthdays of our adopted children are often bittersweet to me because it reminds me of the time my children spent outside of the loving protection of a family.  I will never understand how the citizens of this planet can allow kids to have such rough starts to life, but I'm very blessed that God set us and David on a path to be family forever.  Many adoption critics would point out that this post's first paragraph fails to recognize that David's life story started before age 5.  To those critics, I would say David lives with good memories and his healing emotional scars everyday.  They have become a part of his future as these have helped shape who he has become.  Below is a photo of a worried David, sitting on a table about to receive lifesaving nutrition, medicine and LOTS of love from Children of the Promise.  Many kids like David were close to their life story ending too soon, but were sustained by the efforts of groups like Children of the Promise.

﻿ The "orphanage" as we often call it, has become a resource center for families in Haiti.  Children of the Promise is building for a future that lets them provide kids with the security of a family from the minute that they enter into care.  This will let kids like David learn how to function as an individual that is part of a family from the beginning, rather than having them function as a group within a group.  We are excited for what this will mean for kids who have a family to return to, as well as for kids who are waiting to be adopted.  If you are looking for a ministry to support, I would strongly recommend Children of the Promise.  I've been there and I've seen the needs AND most importantly I've seen the difference that they are making for infants and toddlers in Haiti.  As David would tell me right after he came home, "Babies under the mango tree need a mom like you."  I'm so happy that Children of the Promise is moving to a new method of service that will give these babies the moms that they need right away while they are in the care of Children of the Promise.  I'm so pleased that we can be a small part of making these changes happen!

Email ThisBlogThis!Share to TwitterShare to FacebookShare to Pinterest
Labels: adoption, day to day