Friday evening I took most of the kids except Jon to my mom's house for a family dinner.  Daddy and Jon stayed home because I didn't have enough seats for everyone and Daddy's car hit a deer on Thursday morning.  The kids had a great time seeing family, and this year there was an Easter Egg hunt so they all LOVED that part. 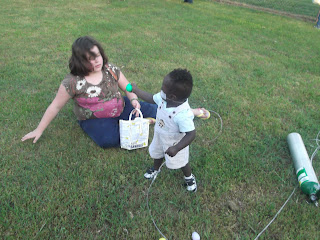 Saturday was fairly relaxing except our usual pass time of working on the deck and hubby translating.  However, Sunday was an early start.  6am Sonrise service and the men like to get there at 5am to cook.  Mr. Workman decided to pre-cook some pecan pancakes, which he had been asked to bring, and arrive at 6am so I would not be alone getting all the kids together.  The twins, Matt & David who usually get up early were so tired and wanting to go back to bed.  Jon couldn't figure out what was going on!  I think he thought we were headed to St Louis to the doctor to be up so early when it was still dark.  Vanessa, Corrine & Hannah were dressed in their best and ready to go long before the rest of us.  I was SO happy that someone was awake....go girls!

We got to church just as the steam started boiling out of my Durango's hood.  The service was lovely, but the kids were restless.  With Mr. Workman in the kitchen, that meant the older ones and I had to try to keep everyone "acting proper"; whereas usually a daddy "look" or shoulder squeeze settles the whole crew and makes my part easy.  After church, Mr. Workman filled my Durango with coolant and I drove straight home taking the shortest route!  I barely coasted in the drive as the engine once again started to overheat.

Then came MY FAVORITE part of Easter this year!  Mr. Workman cooked a complete turkey dinner with all the trimmings while I took a five hour nap!!!  The nap was great and his dinner was even better!  Turkey, potatoes, noodles, sweet potatoes, rolls and even pumpkin pie...what a man!

After dinner, we gave out Easter bags in our room in an attempt to control the chaos.  It didn't really work.  Plus Luke had diarrhea all over just as we were ready for our Easter egg hunt so instead of a rain delay, we had a complete clean up delay!

This year Ma and Pa Easter Bunny were sneaky and the eggs that sounded like they had money, only had pennies!  HOWEVER, the eggs that felt like they had Peeps in them had quarters!  It was great fun watching each of the kids gathering eggs.  Jon was perhaps the most excited and apparently he remembered Easter from last year.  He was ready to open eggs and eat lots of candy, which he did, so much so that I delayed his tube feeding a bit on Sunday evening to make room for his formula.