Our oldest daughter Grace is going to be 16 in April and for the last several months, she has been eligible to get a driver's permit.  Now as 16 is quickly approaching, she is becoming more anxious to learn to drive.  She has taken Driver's Education at our Home School Co-op.  She has studied the state driver's manual, and now it is our turn as parents to do our part.  So after a brief conversation with my hubby, it was decided that it is actually my turn to do my part.  (Don't worry...Daddy will be teaching ALL the boys...maybe even Jon and Nate!)  So you may wonder why Daddy is waiting until later lesson to get involved and why I'm not jumping for joy about the opportunity to teach her.  The answer is that she has rarely driven anything!  Grand-dad taught Grace to drive the riding mower....not straight or to where we didn't close our eyes as she struggled to make each turn, but he taught her to turn the mower on, engage the blade and butcher the yard in a weaving pattern that a drunk would struggle to copy.  After many gallons of gas and several tries to fix her original mowing, we said, "Good enough, I think we will start mowing again."

Now I have never been known for my patience.  Granted my kids have improved (or maybe just stretched) my patience, but I should still be VERY humble about the virtue of patience.  I didn't want to be a mom clinging to the car door, stomping my imaginary brake and yelling directions so I decided the ideal "calm" place to teach Grace would be at the farm.  When I told grandma this, she said, "What if she meets a car?"  My response was, "In the driveway?"  So with guarded expectation of "if I would let her" leave the yard, Grace and I switched seats for her first lesson.
THE SEAT


So the first thing we had to do was to adjust the seat to the best position for her.  I had never considered Grace to be picky about her seating, but apparently when preparing to drive a vehicle, she needs the positioning and support of a NASA astronaut.  (7 minutes including pictures)
THE PARTS OF THE CAR

Next we reviewed where the gas and brake are and I discovered that she had to look at her feet when selecting the needed peddle.  I also discovered that Grace was going to insist that she needed both feet and preferably one on the brake, while one was on the gas.  So we practiced, with ONLY her right foot....gas, brake, brake, brake, gas, brake....notice the peddle that I'm focusing on.  Then I had her turn on the car and we practiced shifting between P-R-N-D and the importance of keeping her foot on the brake.  (10 minutes)
﻿﻿
﻿﻿

MOVING
Finally I explained to her, that the Durango will go when she removes her foot from the brake and I suggested she try it without using the gas so she could use the brake to stop and get a feel for the brake...well, Grace had to look at her feet to find the brake and when she located, she applied it with all her might.  I must tell you; I NEVER thought a person traveling at 3MPH could be thrown through a window of a car, but I now know it is probably possible...ALWAYS wear a seat belt, even in the driveway when rolling at 3 MPH.  Lucky for me, Grace caught on to steering turns fairly well with only a few laps around the oak tree and the yard.  Backing up seemed more challenging, but Grace had perseverance on her side....well, that and the fact that Grand-dad attached the porch hand railing to last a lifetime...yeap, can't even tell that she "nudged" it, while I said brake and she looked at her feet. (20 minutes)

Grace was actually catching on very fast, except for looking for the brake and the gas, so I decided that she could drive the dirt road about a mile to where the church used to be beside the cemetery.  This is where I was starting to wish for a hidden camera.  It was becoming obvious that America's Funniest Home Videos would have  received the video and just mailed us the prize money.  The highlights of the 1.7 mile drive to/from the old church were the following:

THE PEDESTRIAN
﻿﻿﻿﻿﻿﻿﻿﻿﻿﻿﻿﻿﻿﻿
As we approached the driveway to the farm again.  My Cousin Carl was standing along the road waiting for us.  While we were still 100 yards away or so Grace wanted to know why he was standing so close to the driveway because it made her nervous.  Carl was standing behind a concrete filled metal pole at the mailboxes which are well beyond the driveway.  (Not to say that he wasn't as nervous as her!)  Carl visits with us and has two fabulous offers...1.)  free venison and  2.) to open the gate to let Grace drive in the hayfield.
﻿
THE TRAFFIC
Grace and I picked up the venison and got it in the cooler.  Then she headed down the lane to the hayfield.  A long ways ahead of us, Cousin Carl pulls out with his tractor to take hay to the livestock.  Grace declares, "Great traffic!"  I point out that she won't need to pass him because he is going to the same place as us.  She said she could tell that, but it still was more to keep track of while she drove.
JUDGEMENTAL COWS & NARROW 14' GATES
As we get to the hayfield, Grace must go through 2 generous "farm equipment wide" gates.  Grace slowed to several stops as she lined up with each gate.  Grace was thinking outloud when she wondered, "why the gates were so narrow".  Grace did an excellent job getting to the hayfield, but it was obvious that each new element was adding "more to this driving thing" than she had thought.
Once we were though the gates, the cows were gathered to eat and Grace had to drive around them.  She said they were looking at her judgemental-like and here is the kicker...I have to agree!  There were a couple calves who seemed to recognize the potential to be hamburger when in the presence of inexperienced drivers.  I even tried to photograph "The look", but it was getting darker and the field was bumpy with cow patties (and Grace didn't miss a one with my Durango.) (20 minutes) 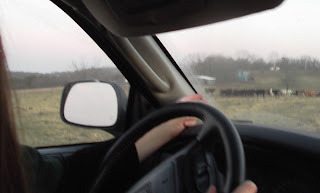 THE EXPERIENCE OF A LIFETIME
I was really dreading Grace's first driving lesson, but she did very well.  She listened, followed directions and made jokes to ease both our tensions.  Don't tell hubby, but I'm really glad that I got to take her on her first driving lesson...and not just becauseit is over and he owes me!  Plus Grace and I used our trip home from the farm to stop and enjoy dinner together at cousin Sheila's Restuarant in Marshfield, which is always a treat!
Grace is a great young lady and she will eventually be a licensed driver so don't follow too close, she might sneeze! Love you Grace!
Posted by Leatta Workman at 1:10 AM

Email ThisBlogThis!Share to TwitterShare to FacebookShare to Pinterest
Labels: humor