We have a tradition in our family to take our children on a retreat over their 13th birthday weekend.  The retreat is a surprise place with a surprise activity list, and it is geared around the likes and preferences of the birthday teen.  Corrine turned 13 last weekend and is our 3rd teenager so she and I (mom) went to Branson for the weekend.

During our retreat, we had a lot of fun together.  We went to see the Haygoods, which is Corrine's favorite Branson show.  I had not seen their show and I was impressed.  It is fair to say that Corrine has good taste in Branson shows.  We also took an outing on the Branson Belle.  (I refuse to call this a cruise!)  Corrine had never been on the Branson Belle and the show was excellent.  Plus Corrine also enjoyed the indoor pool at our hotel, shopping at the outlet mall and eating out. 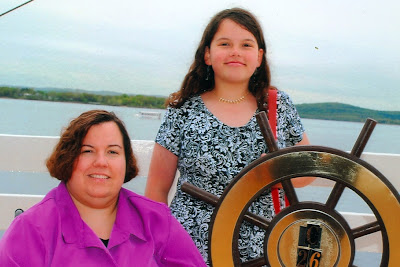 Our Workman Retreats are more than just fun.  We completed 5 sessions on what we want for and expect from our new teen as she becomes a young adult.  We cover all the "hot topics"...dating, drinking, drugs, peer pressure, fashion, personal safety, mood swings, kissing (and all that stuff), and more.   We also talk about "other parents" and why their decisions are not going to look like our decisions.    In our sessions, we cover a lot so by the end of our weekend our new teen has a lot to think about!

So far each new teen's retreat has been just as rewarding for me as it has been for them, and I strongly recommend our tradition to other moms.  The retreats can be simple and inexpensive or they can be elaborate and costly, but the outcome is the same so moms don't need to be rich to make a lasting impression.  I use a program called Passport2Purity and build on it to cover topics like personal safety and helping hurting friends (especially those with complex situations).  Until now my kids' friends have had fairly simple and one dimensional problems, but I know very soon my teen's black and white world issues will start looking more gray.  I want to be one of the resources that they use as they officially define their own values, and a retreat weekend helps set us on a path to work together to navigate the teen years.

A key scripture from our weekend was Philippians 2:3-8:

3 Do nothing out of selfish ambition or vain conceit. Rather, in humility value others above yourselves,
4 not looking to your own interests but each of you to the interests of the others.
5 In your relationships with one another, have the same mindset as Christ Jesus:
6 Who, being in very nature God,
did not consider equality with God something to be used to his own advantage;
7 rather, he made himself nothing
by taking the very nature of a servant,
being made in human likeness.
8 And being found in appearance as a man,
he humbled himself
by becoming obedient to death—
even death on a cross!