A Wedding & A New Addition 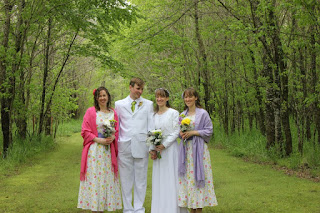 On Saturday, we attended Amber and Stephen's very cold and very lovely outdoor wedding in a wonderful country setting.  The entire ceremony was very intentionally planned to reflect Christ's relationship with the church and the outcome was a spiritually uplifting experience.  And as a BONUS the musician played the hammered dulcimer flawlessly.  It was truly a privilege to be in attendance. 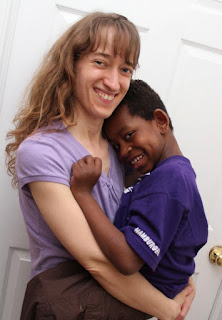 For those of you asking, "Who is Amber?"  Amber is our house hero Angela's twin sister and she has been Jon's devoted care giver for over a year.  More importantly Amber is as awesome as Angela, and therefore quickly became one of Jon's most favorite people.  Amber has not only bathed, fed and dressed Jon most weekdays, but they have ridden horses, went swimming, tried hairstyles, worked on school lessons, learned to drive a power wheelchair and much more!  So Jon wasn't exactly thrilled that she got married and moved away without him!

Of course going to a wedding has risks.  There could be tears, lots of hugs, good friends, frost bite (joking, but in this case), and to my surprise there could be orphan puppies.  Yes, we went to a wedding and got a puppy.  Who knew?!

We were leaving the wedding and some cruel person had dumped 4 puppies in a taped closed box on the side of this isolated country road.  Another family that we know was looking at something in a box so we stopped and of course my kids jumped out of the car to look too.  Before I could even assess what was happening, Matt had a puppy, David had a puppy and Corrine had a puppy.  All of them wanting to keep "their" puppy.  (Keep in mind that Corrine just got a puppy!)  So in a moment of parental weakness...by the way, if you have ever seen David and Matt's eyes light up over dogs, then you understand what caused my weakness...I agreed that we could keep one.  (Don't worry, our friends kept one puppy and we made sure the other two would be found good homes.)

So we brought Oreo home and he is about the calmest, huggable, lovable puppy ever.  Oreo made fast friends with our already beloved Pippi and the two are great playmates.  Needless to say I was feeling pretty good about this decision to add Oreo until David put me on the spot about why we couldn't keep all the puppies.  David had observed that Oreo cried the first couple nights and he pointed out that the puppy was missing his mom and siblings.  David told me, "Mom, I'm surprised that you wouldn't keep their family together.  You kept Mark, Luke and Matt together."  With a lump in my throat, I started explaining that it was time for the dogs to live in different places and have their own people families, just like it will someday be time for him to have his own place to live.  (BTW-I THOUGHT my answer was fabulous!...and pride does come before the fall.)  David responded, "But I'll still be in our family and see my brothers and sisters.  Oreo may never see them again and maybe not even remember them."  At this point, I knew I was in dangerous water!  This wasn't about Oreo, this was about David who doesn't remember his family of origin.  So what did I do?  I said, "You're right David.  I should have taken them all.  I just didn't think we could keep up with so many dogs."  David's response was, "I just wish that you would have listened to me that day."  This broke my heart!  So in a final effort to "fix" this situation, I explained, "David, we wouldn't have been able to keep them all because the city has a law that limits the number of dogs that we can have."  David responded, "That is sad because I would have taken good care of them all."  I said, "I know you would have and I'm so pleased that you are so thoughtful as to want to keep Oreo with his family." 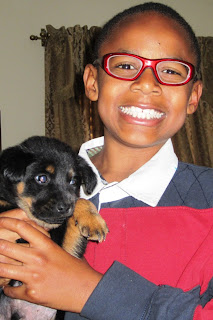 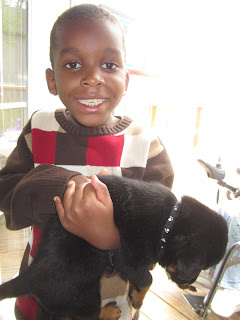 Have I mentioned lately that I have the BEST kids!