A mom recently called me with a problem that she was sure was a sign of failure.  She cried as she explained that her son wants to send his adoptive sister back to her country of origin.  She tearfully went on with her story saying that her son says that his sister has ruined his life and had a list of true indictments including that she breaks his stuff and is mean to him.  So I asked a couple critical questions.  Did he call her his sister when complaining?  Is she actually hurting him physically?  Abusively?

The mother explained that he had called her his sister and that her daughter was too little to physically hurt her son.  However, she said that her daughter did seem to enjoy getting her brother into trouble and seemed to be pleased when he was angry.  I asked if this could be an intense sibling rivalry.  She said that is what she thought until her son started asking to return his sister.

Next I asked if their family had ever discussed the "Sibling Return Policy".  The mom immediately snapped back, "Well we aren't sending her back!  I just want to know what we did wrong? Why hasn't our son bonded with her?" 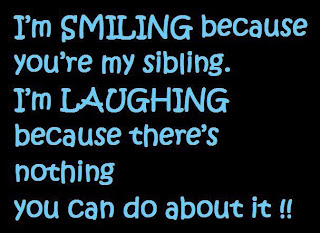 Now TRUTHFULLY, I almost laughed at her for thinking it was her fault, but I knew she was dead serious so I had to explain myself. I told her that I didn't know of any older sibling who hasn't wanted to return a younger one at least once in their life. It honestly doesn't matter how the family is formed, this is a part of learning to be a family. I explained that the problem comes in when these type of comments can do so much damage to an adopted child who is not secure in the permanency of their family. Some families simply forbid their children from making such comments.

Personally, my kids aren't that well-behaved.  They would just make the comments behind my back.  Therefore, our family has a "Sibling Return Policy" which basically says, "once you join our family, you are here forever and so are your siblings NO MATTER WHAT.  Neither you or your sisters and brothers are going anywhere."  Now a word of warning, if you set a policy, it will be tested....creatively, multiple times!  I've had kids try to find loop holes like what if they run away or what if they wanted to go live with grandma.  One child once asked, what if they hurt a sibling.  I said, "You will be punished."  Then this same child wanted to know what happened if they killed a sibling...now that question will make your heart race...so I turned the question back, "what do you think would happen?"  The child had a better answer than I did AND I know this child AND I know how frustrated they were feeling so we focused on ways to deal with and cope with annoying siblings.  Another child once asked me if the policy still held if my hubby and I died!  Talk about looking for a loop hole!  (I'm hoping I didn't scare this mom who called.)

The bottom line is adoptive families have sibling rivalries the same as biological.  Its just that our kids can unleash the emotional equivalent of a nuclear bomb on siblings with attachment difficulties and the kids know it...at least mine do.  Therefore, the parent has to neutralize the threat in whatever manner works in their home.  Then, like any parent, we wait and watch closely to see if this is a serious problem that might require professional assistance or if this is a typical sibling adjustment issue.


Siblings are the people we practice on,
the people who teach us
about fairness and cooperation
and kindness and caring -
quite often the hard way.~~Pamela Dugdale
Posted by Leatta Workman at 12:26 AM

Email ThisBlogThis!Share to TwitterShare to FacebookShare to Pinterest
Labels: adoption