REUSE
I was able to reuse her old dresser and bookshelf with a new coat of paint and make them look similar to ones that she had admired in Kirkland's.  The small dresser at Kirkland's was $435 and my $22 gallon of paint covered the big dresser from her brothers' room (we swapped some furniture too--brothers David & Matt now have the old beds out of the extra room) and her bookcase.  Then I reused accessories from my office such as plants and a lamp.  Finally I searched out some great sales to make me feel fiscally responsible while I spoiled her.
OVER THE TOP 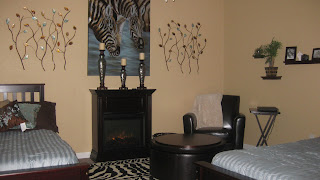 I've know for several months that the one OVER the TOP thing that the cool and sometimes damp feeling, basement room needed was a fireplace.  I knew that no matter how little or much more that I did, I knew the fireplace would set the tone!  I watched sales and shopped online and had no luck at finding what I wanted within budget until this last week when the exact one that I wanted at Lowes went on sale for 25% off!  Then I added twin beds from Import Warehouse for a fraction of the price of other stores.  Plus I got the great zebra rug there for $39!  Finally, Bed, Bath & Beyond helped me out with deep discount blankets, sheets & a down comforter.  So my final decision was how to create a comfortable study corner.  She had a small desk that she had really outgrown in looks and in size that I could repaint, but her sister is doing homeschooling on a TV Tray and would love Grace's old desk.  I looked at desks and chairs and just couldn't find the comfort and style that I wanted, but at Target there was a leather-like chair and ottoman.  The ottoman converts to a low table and I realized that a laptop desk or TV tray could complete a super cozy and comfortable work corner.  Plus Target had a plain, but insulated brown curtain on clearance for $2.50 which meant that I couldn't make her curtain for that price (a big time saver).
PICTURES & SHELVES 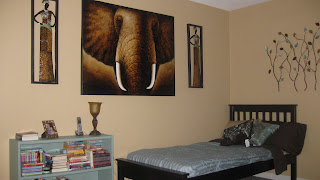 Grace had fallen in love with the zebra picture and I had bought it with her with me.  However, I had to solo on the rest.  So using the zebra picture as my focal point, I selected a BOLD elephant picture which was on canvas just like the zebra.  The shelves were the easiest thanks to pre-packaged groupings at Target.

When we got home, Grace could see her old desk in the garage and wanted to know why it was in the garage.  I told her that I would move it back.  When we got inside, she read the note that we put on the door and opened the door.  It would be an understatement to say she was shocked.  In fact, Matt who went to Grandma's house with her said, "Wooo-Oh--wow!"  From a 4 year old that is high praise!
THE SIBLINGS 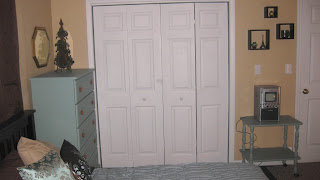 While setting up the room and purchasing the items, I had to offer various guidance also known as rules to Grace's younger brothers...okay actually only to David.  David thought the new electric fireplace was a waste because, "I can't even roast marshmallows or hot dogs."  I assured him he was not to try to cook on or even touch the remote for the new fireplace!  Then when I got the ottoman, David let me know that Matt would easily fit inside.  I assured him that NO ONE fits inside, BUT I have noted the conversation in the even that a brother is missing and David is sitting on the ottoman!  The twins have been told that the room is "off limits, even to Nate" which got an, "Oh, no!"
I hope Grace enjoys her new room.  It was a big splurge for our family, but I'm glad she has a room as grown up as she has become.
Posted by Leatta Workman at 7:48 AM

Email ThisBlogThis!Share to TwitterShare to FacebookShare to Pinterest
Labels: projects