It was a very busy week last week.  I tried to do a weeks worth of work before Wednesday.  Then Nate had surgery in Little Rock on Wednesday.  I had packed a mountain of projects, but forgot my laptop cord so my big plans for achievement got smaller!  (Plus the flu shot that I got on Tuesday, had me feeling a bit sickly too.) 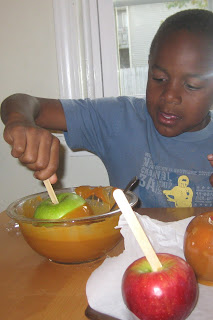 Hannah got sick at school Thursday and said her head was hurting.  Thursday night Nate & I got home late and Nate had a very rough night.  So I started Friday at the pediatrician with Nate and Hannah.  Then Mr. Workman had debate all weekend so it was me with all the kids while Nate was needing lots of one-on-one care.  So I did what any realistic mom would do.....kept the sick ones medicated (David joined the sick group Saturday) and I ordered pizza, bribed the older ones to get them to help more, encouraged watching movies and let them play outside as much as they would.
Finally today I pulled ahead of the piles of work and sick kids.  I went grocery shopping this afternoon and made Creole beans & rice with chicken sauce.  Mr. Workman made two pumpkin pies per Hannah's request.  Then this evening I let the older kids make Carmel apples.  They seemed to really have fun making them.  This is the first year that I have been brave enough to let them dip their own apples so they thought they were big stuff.
Posted by Leatta Workman at 2:02 AM

Email ThisBlogThis!Share to TwitterShare to FacebookShare to Pinterest
Labels: stress