When we plan an outing for our Stay-cation or any other fun day, I usually contact each place that interest us and look into group ticket prices.  I also in my 4-5 sentence introduction email, I explain the age and ability range that we are bringing to their location.  Occasionally, I get an enlightened venue employee who understands that an aquarium is not going to entertain a blind/deaf child like Hannah OR that a host of inaccessible thrill rides are not for Vanessa or Jon OR...well, most of my readers understand.  We do family things as a family, BUT some of our family is NOT impressed by the activity due to physical or mental ability differences.  It is easy to say that the admission cost for those who won't enjoy the activity is "just part of being a family" until the admission fees get high enough that the outing is just wasteful.

So about a month ago, I contacted St. Louis City Museum and was surprised when they offered for us to come as their guests!  They explained that there is a wide variety of activities and they encouraged us to explore and see what interested us.  We had never been to the City Museum and were not prepared for how huge and diverse its activities were!  It was like 4 Wal-Mart Stores full of fun collections stacked on top of each other with an amusement park on the roof!  Obviously a lot more energy and maturity than our group had would be required to get completely through, but it was well worth the experience to see such a neat reuse of an old industrial shoe factory and found art/treasures! 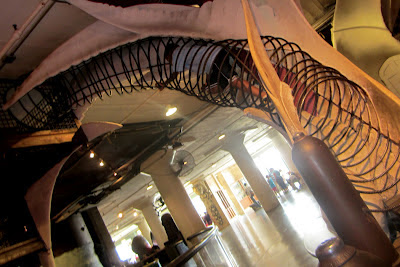 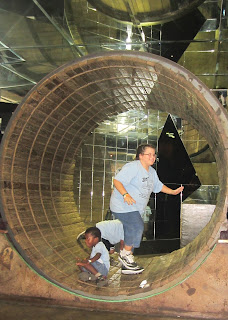 We were going to St. Louis because Jon and Vanessa had doctor appointments so this gave us the opportunity to divide the kids for a couple hours so Amber and Angela had only the kids who could climb, crawl and jump.  They spent this time doing the activities that might be too hard for Jon, Vanessa and Nate or that might not interest Hannah.  When we were there together, we checked out a hall of mirrors, toddler town, art corner, and several other areas.  Hannah was overwhelmed by the crowds and noises, but she loved an old beat up grand piano on the 2nd floor.  Even though there were keys that did not work and missing pedals, she made it turn out some pretty good tunes!  She had never played a grand piano before and probably could have stayed at that piano a lot longer.  If we had discovered it sooner, I also think she would have LOVED the slide from the 3rd floor to the 1st, but sadly it was closing time when we noticed it. 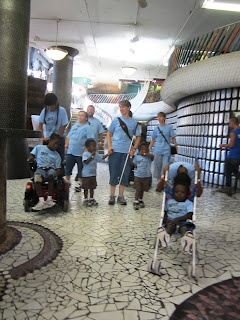 Grandma and I packed breakfast, lunch and snacks, but we stopped at White Castle for dinner because no trip to St. Louis would be complete without those little burgers!  It was even more fun that Amber and Angela had never ate at a White Castle so we HAD a duty to introduce them. 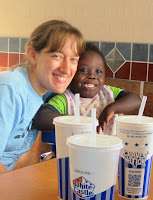 It was a crazy, long, tiring day and we didn't make it home until after midnight.  We had planned another day trip to St. Louis around another set of doctor appointments in August, but we may rethink that and see if a two day trip could fit in the budget.