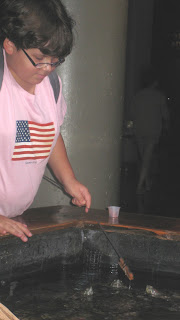 I've been doing a lot off extra work this summer.  Partly because there has been lots of work available and mostly because I knew big bills would be rolling in this month and next.  So with all the extra travel, I have tried to incorporate in some fun for the kids.  (Those of you who are FB friends know I travel some exciting "sounding" places, but ultimately places like Paris, TX; Greenland, AR; Prague, OK; Cleveland, MO; and Havana, KS...well, they tend to lack the awesome activities of their namesakes, especially for the kids.)  Despite my working being in mostly incredibly boring locations, we have been able to hit a few fun stops together and I have a few more on the calendar "for them"/"for my work" yet this summer. 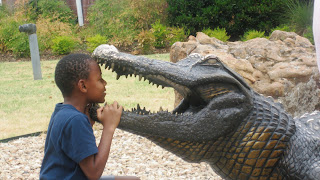 While Grace was at camp for two weeks, David & Corrine got to enjoy a few sites in Oklahoma including the Aquarium and the fountains in "Central Park".   Hannah, Corrine & David also got to do some swimming, and Matt arranged his escape to grandma's house for a week.  Matt got back just in time to go to VBS with David next week at our neighbors church.  This is the boys 3rd VBS of the Summer, but they are excited.

Jon & Vanessa have been mostly stuck at home while they heal after surgery.  Jon's pressure sores are almost gone and he is to start therapy any day now.  Vanessa is only two weeks out so she still has to wear a brace for 2 to 4 more weeks.  Unfortunately, with her long legs, the brace makes her almost impossible to transfer into a car.  Plus her wheelchair for the brace is even huge-er!  She has a check-up next week so hopefully we will learn that she can be out of the brace soon. 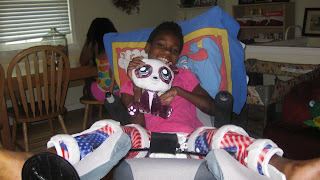 The babies have been mainly kept near home this summer.  Between the heat and therapies 4 days a week, it doesn't seem very smart to have them out and about for too long.
Posted by Leatta Workman at 9:46 PM