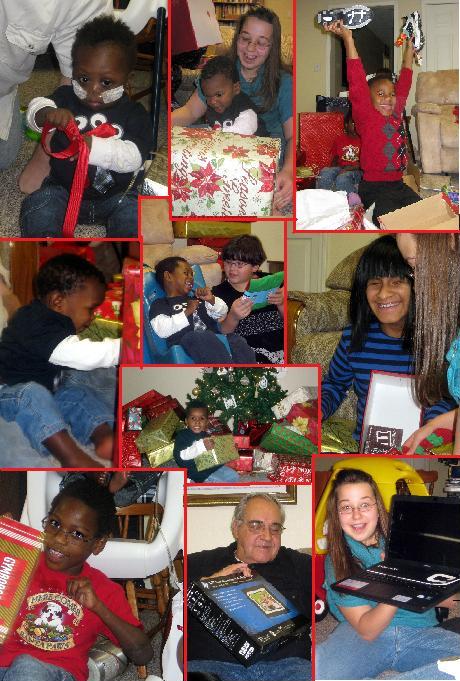 Mr. Workman and I were discussing tonight (well, this morning), how our measuring of a good Christmas has changed through the years.  We mused that Christmas used to be measured by things like....how good the gifts were, how tasty the food was, and how much fun the gatherings were.  It amazes us that we now measure Christmas by things like how much time we got to spend doing fun holiday stuff with the kids, having resources to have good gifts for each child, and getting to share the Biblical Christmas story with our children.  By the current measuring stick we had an amazing Christmas!

Serious Christmas celebrations started with a get together at my parents home on Thursday.  Then Friday night, my folks came to visit and as is traditional we opened gifts after dinner.  As part of this tradition, dinner is take out and usually pizza.  This year it was pizza, pasta and bread sticks.  Then after dinner we rearranged the family room furniture and passed out gifts.  We usually start with the youngest and go to the oldest, but this year we skipped Nate until after Grace because he was being so good watching everyone else.

The twins seemed confused at first, but after a few packages, they were ready to play and it was hard to keep them busy opening more while Grand-dad and Dad assembled and added batteries to toys.  The race track, that I almost didn't buy for them, surprised me by being the twins and Matt's favorite toy.  Matt got a "Cozy Coup" car and wanted to take it outside to play immediately.  He was pretty disappointed when we told him no because it is dark and very cold.

Matt was our most excited child and he kept asking, "Mine?"  When we said yes, he would smile so big.  David was our next most excited and he was definitely the easiest to photograph.  He knows the "drill" and was facing me as he opened most of his gifts.  Jon obviously didn't realize that he was included too because when Corrine brought him his first gift, well...he almost leaped out of his chair!  Jon loved everything!  I had picked out two awesome toys for him that had buttons that he can reach and press.  Jon approves of my choices and has played with them non-stop.

Vanessa got a doll and lots of clothes including a fuzzy pink sweater, which she hugged when she opened the box.  It was very cute!  Hannah's favorite gift was a pair of super soft, fuzzy socks that Grace had gotten for her.  Corrine loved it all and Grace got an unusually large gift...a laptop!  She thought we had wrapped her Christmas in my old laptop box so she did not realize that she actually got a laptop until she reached in the box.  Great fun!

Nate opened his gifts last, after the other kids, and he was more interested in Jon's toys and the ribbon than in his gifts.  However, by Christmas morning he was ready to play with his too.

Christmas Day was filled with kids playing with new toys, watching new movies and sharing a huge turkey dinner.  What a great celebration!


Luke 2:4-14
﻿
4 So Joseph also went up from the town of Nazareth in Galilee to Judea, to Bethlehem the town of David, because he belonged to the house and line of David. 5 He went there to register with Mary, who was pledged to be married to him and was expecting a child. 6 While they were there, the time came for the baby to be born, 7 and she gave birth to her firstborn, a son. She wrapped him in cloths and placed him in a manger, because there was no guest room available for them. 8 And there were shepherds living out in the fields nearby, keeping watch over their flocks at night. 9 An angel of the Lord appeared to them, and the glory of the Lord shone around them, and they were terrified. 10 But the angel said to them, “Do not be afraid. I bring you good news that will cause great joy for all the people. 11 Today in the town of David a Savior has been born to you; he is the Messiah, the Lord. 12 This will be a sign to you: You will find a baby wrapped in cloths and lying in a manger.” 13 Suddenly a great company of the heavenly host appeared with the angel, praising God and saying, 14 “Glory to God in the highest heaven, and on earth peace to those on whom his favor rests.”
Posted by Leatta Workman at 12:24 AM

Email ThisBlogThis!Share to TwitterShare to FacebookShare to Pinterest
Labels: Christmas