Today was a REALLY bad day.   It was the worst that I have had in a while so I guess I was overdue, but "Wow, oh wow!"

If I had know, I would have stayed in bed this morning with the covers over my head.  I won't go into all the terrible highlights but the day got rolling with weighing in and having a dreaded and feared gain.  My first gain in 162 days of dieting.  I am not surprised because trying to sell our house/buy another has me stressed and I've been staying up late packing so I'm not getting my rest and of course, my kids are at home eating all day long!

Other highlights were a professional group's error that is causing me to look like I don't pay my bills.  The dryer went out.  I broke my key off in the ignition.  I had a terrible headache and the kids seemed to be extra loud.  Plus we added more "to do" to my list for getting the house ready.  I tried to turn the day around with a diet approved lunch salad from Subway, but Nate got it and dumped my drink into my salad which made it wilt to an icky, slimy meal.

One last highlight (or lowlight, more appropriately) was finding out that our realistic first option for a house in Kansas (not the dream group home) is going to be auctioned for cash so we may not be able to get this most affordable home.

My Kids to the Rescue

The little guys just knew I had a headache, but they brought some much needed comic relief to my afternoon.

First, Mark let me know that his tummy was hurting and a few presses on his tummy revealed that he was obviously constipated.  I asked him if he had pooped today and he said no.  I asked, "When did you poop last?" and he said "In the potty."  (I love these funny "still learning language" conversations.)  So we reviewed that I was not asking where, but when...like yesterday or Sunday...and his answer was "Someday".  I think he meant Sunday so after drinking a cup of warm water and a bathroom visit, he let me know that the water fixed his tummy ache.

Then Luke crawled on my lap as I was on the computer looking at the newest Camp Kivu pictures and saw this picture of Grace in a raft. 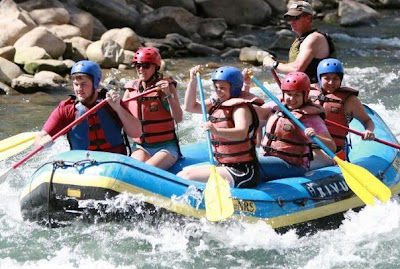 He asked if Grace is still at camp (for the thousandth time since she left 9 days ago).  I said yes and he pointed at the picture and said, "This is Grace at camp."  I said yes and in a very concerned voice he asked, "Her camp flooded?"  Now I must tell you that I was tempted to just say "Yes!"  As a mom I find my kids going rafting to be terrifying.  Frankly, I would prefer that Luke think that he should only do that if the camp floods!  However, I was a good mom and explained that camp did not flood and that she was having fun.  Much like I feared, Luke let me know that he wanted to go to camp and do that.

Lastly, at bedtime, I kept hearing cricket sounds and I started checking all the windows to see which one was open because the air conditioner is running.  I climbed over a bed and around moving boxes and still found no open window.  This whole time Matt who was supposed to be going to sleep, kept trying to tell me something and I kept telling him hush so I could hear the cricket.  Finally, he insisted on telling me something and he said "The noise is from Jon's crib toy."  I almost died laughing because sure enough, Jon had activated it himself and it was playing a lovely cricket's tune.

Posted by Leatta Workman at 8:29 PM